Y6 and Y5 pupils from all three primary schools involved visited Crosby Library in order to carry out research into what Maghull was like 100 years ago. You can read what pupils from Lydiate Primary thought about the visit- what they did and what they learned – below.

This short video, featuring local historian Bruce Hubbard, explains the benefits of the visit for the pupils. 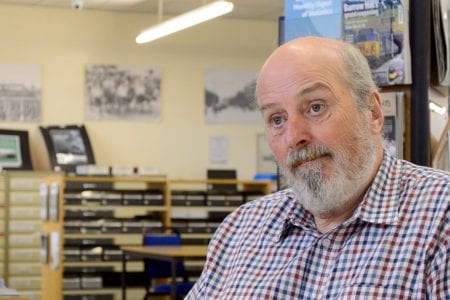 When we went to Crosby library we went into 2 groups then one of us staying in a little room with posters about people/places/battles from Sefton or in the war in that room we watched a little video about this man who was interviewed in 1990s and then some children and teenagers acted what his interview was all about. The other group was split into smaller groups with about 4 or 5 children in it and we went to 4 places; the computers, the maps, the news printer and the book activity .My group was the 2nd group so we got to go to the book activity first. I find World War One a very interesting subject of history as it involves lots of dying and lots of relying on its country.

I liked the newspaper activity of printing off the pages of the newspaper because it had my surname in one of the newspapers. In the other room which had the video about the gentleman we did postcards to family member as if we were from the war we got told we could be either somebody made up to be at war or somebody from our Corridor Book Private Peaceful I chose to be somebody from Private Peaceful and I chose to write to Molly from the book as I was Charlie her husband.

I was very interested in the posters around the room there was about 13 or more with lots of information on people/battles/places from the war/Sefton. There were two tables one with replica/real items from the war and then the other table had diaries, letters and drawings from 1914-1918 in a glass cabinet. On the table with replicas or real items there was woolly underwear and Mrs Faragher tried them on asked one of us to take a picture of her, there was a photo person there and asked a few of us to take a picture of us and took a picture of me. On the replica/real table there was propaganda and postcards on the table.

Going to the Crosby library was a great time. The activity I enjoyed the most was watching the video of a boy who signed up for the army and talked about his experience. We did lots of fun things like writing postcards to our family, looked at the local history, print out some old WW1 newspapers and research some famous soldiers on a website. We also looked at some old artefacts that had been dug up at the battlefield. When we wrote our postcards to our family, I chose to write to my mother and my brother. It was very interesting learning about what the town used to look like in those days. The most interesting thing about that was that Deyes Lane used to be spelt Dey’s. All the newsletters were printed around the time the war started. We had to scroll through using microfilm, which is very clever. It was a very enjoyable experience and I would definitely go again someday.

When we went to Crosby library we learnt a lot about world war on. I find world war one a very interesting subject so this was a great experience for me. First we went into a theatre and met the friendly staff. They told us to get into two groups and that we would all be doing something different. My group was the first to watch an amazing clip which students of Liverpool University skilfully put together. It involved a young gentleman who was in the war who survived until about the age of ninety. He shared his emotion filled tale which reduced some of us to tears. When the clip finished we were asked to pretend were a person who was experiencing war. We were asked to write a postcard home to whoever we want.

I chose to write to my mother and I also chose to cover up the reality of war. After we finished that task we headed out into the main section of the library to take on the next task. We were informed that we were to find a newspaper article on the subject we were given. I successfully found the given subject and then was happy to move on to the next task. The next task was to research two young men who had been buried in a war memorial.