Schools visited Liverpool Museum for a WW1 workshop. They were able to do this with the support of the HLF which paid for the transport to the museum. Below you can read an account from one of the children about the visit. 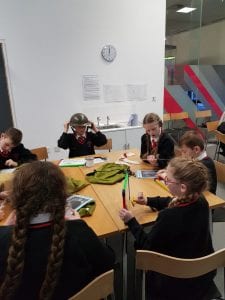 When we went to Liverpool Museum, we learned about how the war started. It started when a Serbian terrorist killed Archduke Franz Ferdinand of Austria-Hungary. Then Austria-Hungary declared war on Serbia then Russia mobilised Serbia’s army. Then many other countries start declaring war on each other.

The war started on the 28th June 1914. It was the Great War, the war that changed things. It was not great in a good way: it was horrific. During our trip to the museum, we looked into the lives of some men and women who were affected in different ways by the war – it was really interesting! One man in the war was called Thomas Attwood. He was killed on the 28th June 1918. He was only just a young adult like many of the soldiers in WW1. It was surprising to learn that many of the soldiers killed during WW1 were still very young. We loved looking at all of the artefacts in the museum! Including uniforms, weapons and medals.

I really enjoyed this trip and all parts of the project.

This will really help our community because it will tell us why those innocent people died. My favourite part was when we looked at the WW1 medals, they looked very interesting.