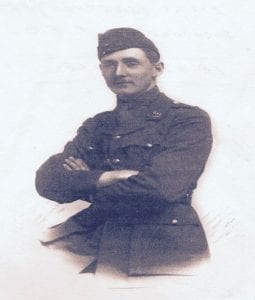 Lieutenant Ewan Blackledge is perhaps the best known of those men from Lydiate who were killed in the Great War. The Blackledge family were well-known Liverpool bakers with a factory and dozens of shops. The family business was founded by Ewan’s father James Blackledge in the 1840s. Ewan lived at Rose Hill, Pygons Hill Lane with James and Lucy Blackledge and their two other sons and three daughters. He was educated at Ampleforth boarding school in North Yorkshire, where he was a member of the Officer Training Corps. He went to the Royal Military Academy Sandhurst in Berkshire before joining The King’s (Liverpool) Regiment, later being transferred to the Royal Flying Corps. He was shot down on a reconnaissance flight on 27th November 1917.